Victoria Coren’s column in today’s Observer shows why she should be the new Shadow Minister for invective.

First, she sums up Nick Clegg:

“A couple of weeks ago, Nick Clegg told the Lib Dem conference: “We haven’t changed our liberal values.”

We know what everyone in the hall was thinking. They were thinking: “Oh hurry up and finish, so I can get drunk and have a disappointing affair with a lobbyist.”

But what was Nick Clegg thinking? At last year’s conference, he promised to scrap tuition fees. It turns out that by “scrap” he meant “the opposite of scrap”.

And then moves on to Vince Cable:

“Vince Cable told the same conference that he was “shining a harsh light into the murky world of corporate behaviour”, describing City financiers as “spivs and gamblers”. May I say, on behalf of spivs and gamblers, that I found this deeply offensive. Nevertheless, it promised a stern new approach to those who punted away the money we used to spend on child benefit and healthcare.

But the words are meaningless. Cable has only one hand on the swivelling spotlight while the other signs agreements to axe everything he promised to protect, because the money was vomited into the banking system and it seems impossible to recoup it from there. We’re not even being protected against this happening again. All the talk is of cuts, none of it is about regulation. So what’s the point of the light? To help the spivs see better, as they extract fivers from our wallets? You might just as well give a child strawberry ice cream for every meal, while promising to keep a close eye on its terrible diet.”

“David Cameron even makes patriotic, tearjerking speeches to “stir a spirit of national unity and resolve”, as if this were a giant episode of Children in Need. Give up your pocket money for Bankers in Need. BIN, I think, is a handy acronym. Come on, families! Join in, jobless! Wheel this way, disabled folk! Let’s all gather together and throw our money towards the BIN!

It’s an old chestnut, but always worth another roasting: remember to keep being insulted by how glibly they demand our sacrifices without paying us the respect of speaking frankly. They dissembled before the election and they’re dissembling now. When they say good morning, they mean it’s midnight. When they say: “I’ve made you a cup of tea”, they mean: “I’ve just weed in your coffee.””

And finally she leaves us with a metaphor I will find hard to forget:

“Some people hoped the Lib Dems would act as balance in the new government – if not obstructing controversial policy, at least speaking honestly about it. But is it any wonder Nick Clegg wasn’t doing that at their conference? Chillingly, he and his speech had to be vetted by David Cameron.

I assume that’s “vetted” in the traditional sense of vet, ie to have a gloved hand up his backside.”

And the cartoon from Peter Riddell is pretty good too: 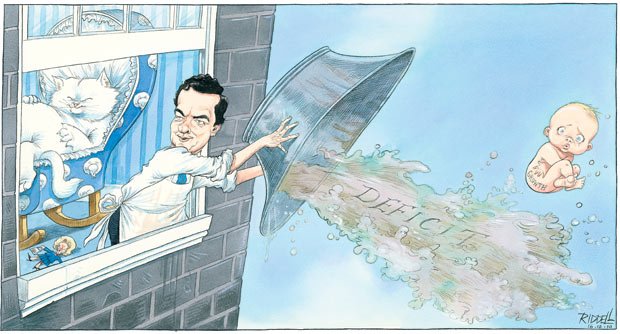